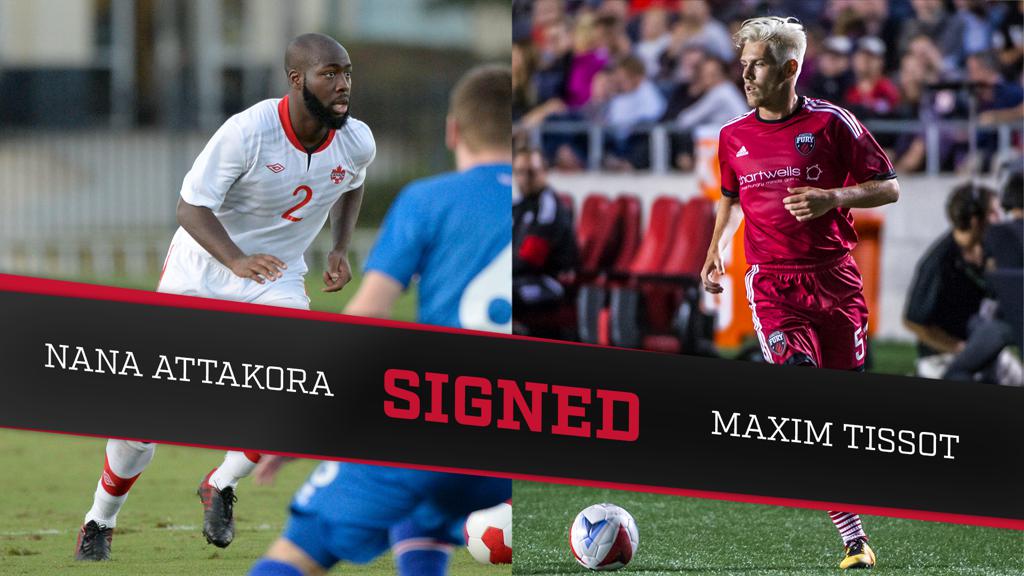 Ottawa Fury FC today announced the signing of Canadian internationals Maxim Tissot and Clement ‘Nana’ Attakora, pending league and federation approval. Tissot, who played in Ottawa in 2016, and Attakora captured the Soccer Bowl with the San Francisco Deltas in the 2017 season.

Born in Gatineau, Tissot is a product of the Montreal Impact Academy and signed his first professional contract with the club in 2013. He spent the early years of his career between MLS and NASL, including his time in 2016 with the Fury where he notched a pair of goals. Tissot has featured in 13 international matches with Canada’s Men’s National Team. In his 2017 season with the Deltas, he played 20 games, starting 14 of them, featuring in over 1,200 minutes of play.

“I’m happy to be home and to be able to play with the Fury, in front of their amazing fans,” said Tissot of his return.

A native of North York, Ontario, Nana Attakora has been treading soccer grounds for over a decade. He first trained with Everton of the English Premier League in 2007 before signing with Toronto FC, where he played alongside Fury FC General Manager Julian de Guzman for three seasons. He was traded to the San Jose Earthquakes in the summer of 2011 and then spent the 2012 season with Haka in Finland before returning to MLS the following year. Since 2015, the defender has been a mainstay in the NASL, his most recent season spent with the San Francisco Deltas, where he started 16 matches, including the Soccer Bowl Championship game last November. Two-time Canadian U-20 Player of the Year has also been a regular feature for Canada’s National Team program at all levels.

“I’m very excited to join Ottawa and to return home to Canada,” said Attakora. “Ottawa is a team with a lot of ambition and after speaking with my ex-teammate [now Fury FC GM] Julian de Guzman, I knew Ottawa was a perfect fit for me, for what I want to accomplish, this year and for years to come. I hope I can bring my leadership and experience to the team and help bring trophies and success to the club and the city.”

Pieces are quickly falling into place for the Fury following the December announcement of the team’s management structure that will see Julian de Guzman remain as General Manager and the seasoned Nikola Popovic stepping in as head coach.

“We are pleased with the way our club is shaping up,” commented de Guzman. “It was important for us as an organization to find players that fit our desired style of play, but also the culture we are looking to build and grow for the Fury FC. We feel that we are moving in the right direction and that we will have an attractive product to present our fans once the season gets started.”

Ottawa Fury FC will return to the pitch on January 29 when training camp opens the fifth season for the club. Season Tickets for the 2018 USL season are available now at OttawaFuryFC.com/2018-Season-Tickets, by calling 613.232.6767 X1 or in person at The Box Office at TD Place.