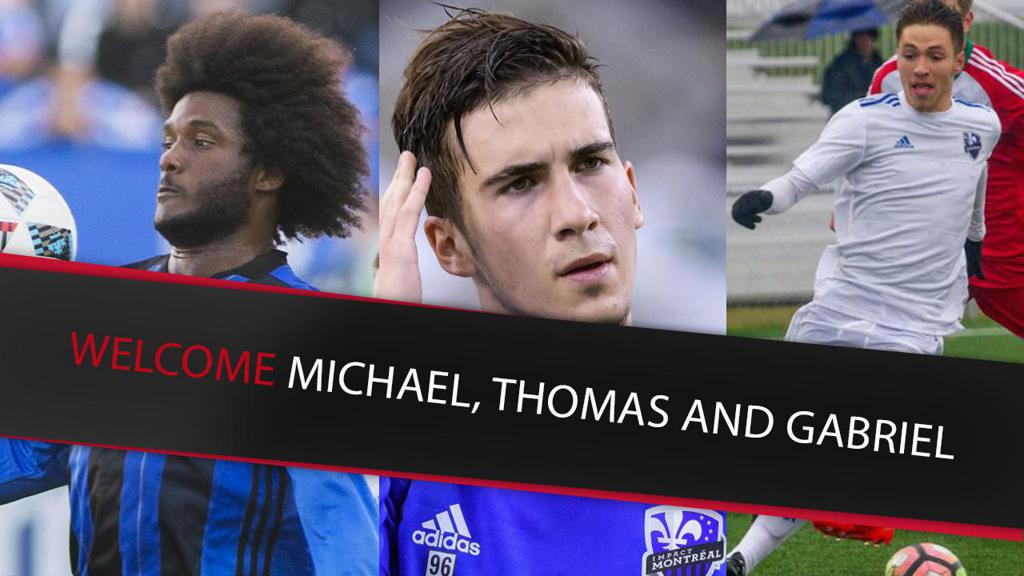 Ottawa Fury FC added three more players to their 2018 roster on Wednesday with the loan acquisition of Belizean international Michael Salazar and Canadian defender Thomas Meilleur-Giguère (May-yer Jee-gair) from the Montreal Impact, as well as the signing of Canadian forward Gabriel Wiethaeuper-Balbinotti (Bal-bee-no-tee), subject to league and federation approval.

Salazar makes a return to Ottawa after featuring in four Fury FC matches in 2017 while on loan from Montreal. Drafted in the second round (24th overall) of the 2016 MLS SuperDraft by Montreal, the New York born midfielder/forward also played 34 games in MLS with the Montreal side over two seasons, scoring five goals.

“It was important for us to bring someone in that had done well in the past with Fury FC and that can come and fit in the culture we have here,” said Fury FC General Manager Julian de Guzman. “Salazar understands the philosophy [Head Coach] Nikola [Popovic] has in place and helps complete the perfect picture we were aiming for in 2018.”

As an international, the 25-year-old has represented Belize on 12 occasions including three appearances in the 2013 CONCACAF Gold Cup and five in the 2017 Copa Centroamericano.

Meilleur-Giguère is another name Fury fans will recognize after featuring for Fury FC last season. He is no stranger to the USL as the Canadian defender featured prominent for FC Montreal during the 2016 season where he started 21 matches and cumulated 1,866 minutes and two goals.

“We felt that bringing Thomas to Ottawa in the early stages of his career would not only add depth to our roster, but also provide him opportunities to develop alongside experienced players at his position,” added de Guzman. “It is a great project for us to be able to mold him as a player and instill in him values that will help him pursue his footballing career.”

As an international, Meilleur-Giguère has represented Canada at the youth levels, most recently at the 2017 CONCACAF Men’s Under-20 Championship in Costa Rica.

Born in L’Assomption, Quebec, Meilleur-Giguère joined the Montreal Impact Academy in 2013, where he featured with their U-16 and U-18 teams before making the jump to their USL team in 2016. He has signed a homegrown contract with the first team in November 2017.

Balbinotti, who is joining Fury FC on contract, has been playing with the Montreal Impact Academy U-18 program for the past three seasons, featuring in 44 games and cumulating 26 goals.

“I had a chance to see him last year and am pleased to see him commit to our club,” commented de Guzman. “He is a great addition to our group and will greatly benefit from Nikola’s expertise and experience in his development.”

He was first identified as a Canadian National Team prospect at a U-15 evaluation camp in 2013, before playing under Ante Jazic and the U-15 National Team program. He also represented Canada at the Jeux de la Francophonie in Ivory Coast in 2017 alongside Meilleur-Giguère, and was recently called up to a Men’s U-23 camp.

Born in Montreal, Quebec, Balbinotti spent the earlier years of his childhood in Porto Alegre, Brazil – the birth-country of his parents. His family moved back to Quebec when he was 12 years old, and he settled in Montreal when he joined the Impact Academy.

The addition of Salazar, Meilleur-Giguère and Balbinotti brings the Fury roster to 23 players – featuring 12 Canadians. For a complete list of the 2018 roster visit OttawaFuryFC.com/Ottawa-Roster.

Ottawa Fury FC will begin its fifth season on March 17 when the club visits the Independence in Charlotte. It will play its first four matches on the road before returning to TD Place for its 2018 USL Home Opener on April 21.