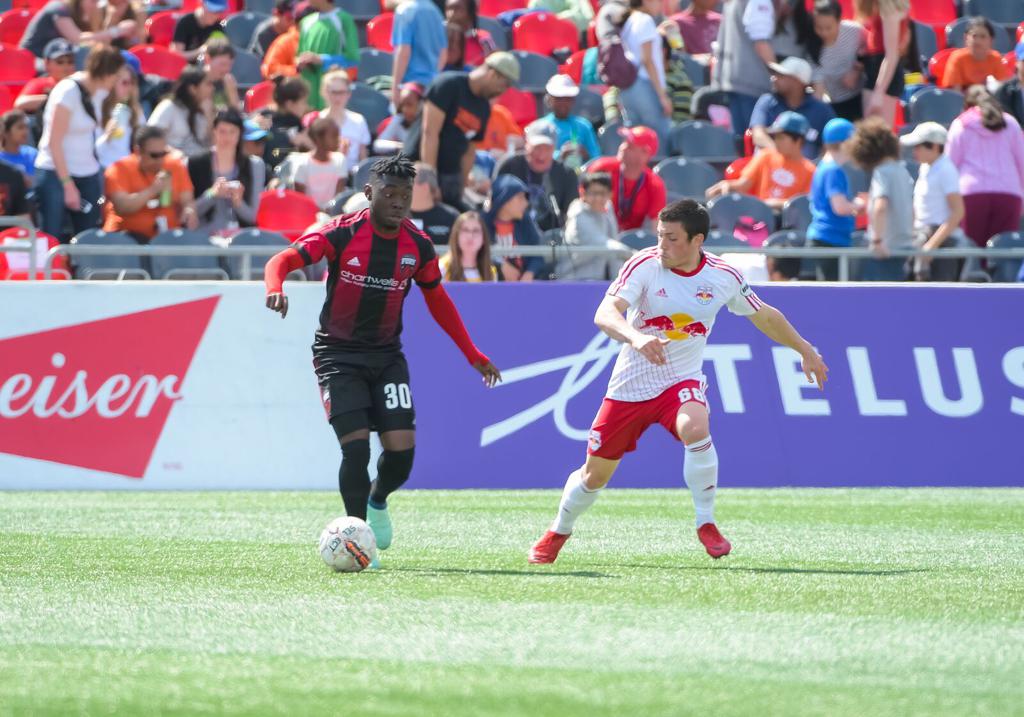 Mid-way through yet another busy stretch, Ottawa Fury FC made their way to Montclair, New Jersey on Sunday to face New York Red Bulls II. In their second clash of the 2018 USL season, lifted by a momentum shifting first matchup in week 8 that revived the Ottawa side, Fury FC made the most of every opportunity to collect all three-points and, led by an inspired performance by forward Adonijah Reid, left MSU Soccer Park with the 3-0 win.

If fatigue was of concern heading into the match, Fury FC Head Coach Nikola Popovic deemed his squad more than ready to take the pitch and opted to field the same starting formation as the mid-week game against AS Blainville. This was a starting XI that featured Americano-Panamanian Tony Taylor on top in the striker position, his more natural position, and one that had seen him score his first Fury FC goal on Wednesday.

Fury FC Taylor and FC Dallas loanee Reid showed their connection early on in match, linking up in the third minute to give Ottawa the 1-0 lead on a beautiful run by Reid, who put the ball away on his first touch following a perfectly weighted ball by Taylor.

RBNYII quick play tested Fury FC at the half-hour mark when Aguinaga won a free kick for New York, barely inches out of Ottawa’s box; the ensuing free kick, however, diverted outside the frame and Fury FC kept their lead alive.

With the temperature in the 30 degrees and humidity levels warranting official water breaks, both sides continued to press on in a game that was being played with a dynamic pace throughout. If Ottawa opened the score early on, it was NYRBII that had the most chances in that first period of play, testing Fury FC keeper Maxime Crépeau on both run of play shots and set plays. Crépeau remained un-phased in front of the cage and helped Ottawa head into the locker room with the 1-0 lead.

As if weighted by the heat, Fury FC came back out of halftime content to slow down the match, doing their best to work as efficiently as possible to preserve energy. NYRBII on the other hand kept looking to push up the tempo and force Ottawa to chase them up and down the pitch.

But efficient they were: in the 57th minute, Reid received the ball off a Taylor header, making the run in the open with only one NYRBII man to beat, and cleverly sliding the ball in the bottom left corner of the goal, past Louro. Second goal on the night for Fury FC, second goal on the night for Canadian Adonijah Reid, both assisted by Tony Taylor.

Reid was feeling the fire on Sunday afternoon, and converted this energy in a hat-trick. In the 65th minute, he burned past NYRBII defenders off a pass by Oliveira, cut-back in the 6-yard box and finished yet another one in the bottom left corner of the goal for his third of the match, his first career three-goal match, and the first in Fury FC history.

In another complete team effort that saw a solid performance across the board by the Ottawa players, it was at times the spectacular play of forward Reid and goalkeeper Crépeau that kept Fury FC always one step ahead throughout the muggy afternoon game. This seventh clean sheet also propels Crépeau to the top of the leaders table, tied with Rawls (OC) and Pickens (Nashville) with seven so far this season.

Fury FC now returns home to face AS Blainville in the second leg of the Canadian Championship qualifying round this Wednesday, before heading on the road again to visit FC Cincinnati (June 30) and Indy Eleven (July 4).

Head Coach Nikola Popovic
“We are very proud of our players. For them to play this way was a very good exhibition. Everything went the way we analysed the opponent, and they followed the strategy that we built for this game very well. We owe the other team congratulations, they are a fantastic team that played very well, and this makes our victory even more meaningful.”

On the road stint and preparation… “We don’t want to talk about excuses. We didn’t create the schedule, but it is very difficult what we are doing here this month, it is making our job very difficult, but there are no excuses. We just have to come, play, and go on to the next one.”

“We have to do a great job managing the players, avoiding injuries, which is at a higher risk when you travel so much and play so many games with such a short time for recovery. We are trying to avoid any damage to our roster.”

“We’re very happy to have these boys so connected as a team and be able to produce such a fantastic performance. I cannot individualise anybody, I think the most valuable player of this group is the team, the whole team, from the 11 on the field, to the other players on the bench and at home that want to be part of this, that want to be part of it.”